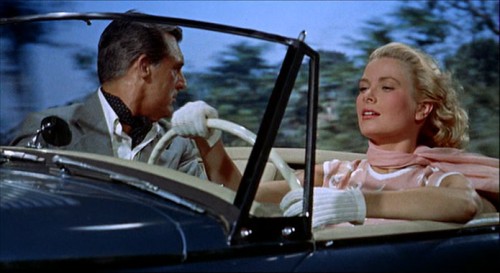 No one has ever claimed that To Catch a Thief is the best Hitchcock film. It’s probably not even in the top 10, but it is undeniably one of his most widely beloved. Because there’s nothing not to love about it.

Filled with cheeky innuendo and a whole lotta diamonds, To Catch a Thief tells the story of John Robie (Cary Grant), a retired jewel thief who tries to clear his name after a series of copy-cat robberies take place. He figures the best way to catch the ‘cat’ is to go after the richest tourists staying in the Riviera. Enter Francie Stevens (Grace Kelly) and her mother Jessie (Jessie Royce Landis). They strike up an acquaintance with John Robie and pretty soon, John and Francie are driving down the Riviera and having a picnic together, in perhaps the most memorable scene in the film (‘Do you want a leg or a breast?’). You probably know that the road where the car chase takes place is the same where Grace Kelly had her fatal car accident 27 years later. It’s an eerie thought but nonetheless, there’s plenty in this film to make you forget that.

To Catch a Thief is probably the most visually beautiful movie ever made. Every shot is majestic. From the sun-soaked sand to the crystal waters of the Mediterranean to the breath-taking landscape of the French Riviera that greets us as the car chase begins. Not to mention Cary Grant and Grace Kelly. Was there ever anything more beautiful than those two?

I myself was lucky enough to wander through the French Riviera a few years ago with my mother. It was a wonderful experience. If only I could have gone for a swim with Cary Grant. Ah well, you can’t have everything.