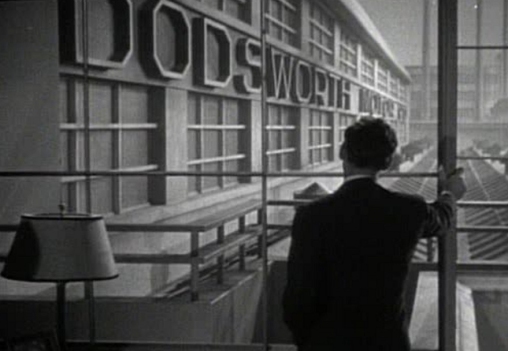 When I saw that Ruth of Silver Screenings and Kristina of Speakeasy were hosting a blogathon about Canada, I knew I had to join. Being part-Canadian myself, it was only logical. The point of the blogathon was to talk about all-things Canada, movie-wise. So basically, actors, directors, movies set in Canada, whatever… So, I decided to talk about a movie that is just too wonderful to ignore and a performance that is quite possibly the greatest ever performance by a Canadian actor in a movie: Walter Huston in Dodsworth (1936).

Retired automobile magnate Sam Dodsworth (Walter Huston) and his wife Fran (Ruth Chatterton) have been married for 20 years. After Sam’s retirement, they decide to go on a trip to Europe, but things soon turn sour when they realize they want different things in life. Sam wants to enjoy his retirement with his wife, while she wants to have fun and enjoy herself. It soon becomes clear that a fling (for both of them) is almost inevitable and so is the prospect of divorce.

William Wyler’s Dodsworth is not like other movies. Dodsworth is about a failing marriage, by which I mean, the failing marriage isn’t a plot device for something else to happen, like in Three on a Match (1932), nor is it used for comedic effect like in nearly every screwball comedy, for instance. Dodsworth is ABOUT a marriage in crisis, the marriage is at the center of it all and it’s raw, it’s real, it’s unafraid and you better brace yourselves for it.

With a cast that also includes Mary Astor, Maria Ouspenskaya, Paul Lukas and David Niven, the performances are the best thing about the movie. And while everyone is great, it’s Walter Huston’s that stands out, without a shadow of a doubt. It’s an absolutely brilliant performance that will destroy you emotionally. Having previously played the character on stage in New York, he was obviously the right choice for the film and he was, of course, nominated for an Oscar.

Dodsworth is brilliant and painful. If you haven’t seen it, do yourself a favor. But get in the right state of mind first.

You can read the other entries for the O Canada blogathon here.