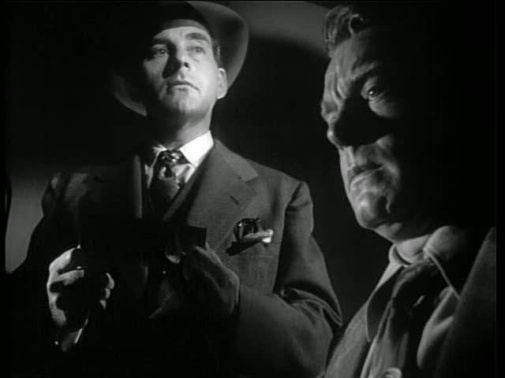 The relentless cat-and-mouse game that is T-Men (1947) proves that, in film noir, you can’t take anything for granted.

The screenplay by John C. Higgins is absolutely fantastic and full of twists, but the star of T-Men is the collaboration between director Anthony Mann and cinematographer John Alton. I recently watched and talked about Raw Deal (1948), also starring Dennis O’Keefe, and, when I was watching it, I knew Mann/Alton would become one of my favorite movie partnerships. The opening scene of T-Men in particular – after the introductory narration – is nothing short of amazing. So dark, literally and figuratively, and so scary, you will actually gasp out loud.

As you can imagine, this is one of the heavy noirs. In fact, everything and everyone seems to be constantly on edge right up until the every end and, for the viewer, any given scene can be simultaneously frightening and heart-breaking, which is quite a feat.

T-Men is tense, fearless and unbelievably exciting. And like Dennis and Tony, you can’t let your guard down at any point. You couldn’t even if you tried.