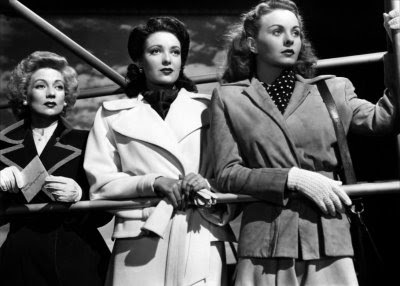 Deborah Bishop (Jeanne Crain), Lora Mae Hollingsway (Linda Darnell) and Rita Phipps (Ann Sothern) are on their way to a children’s picnic when they receive a letter saying that their friend Addie Ross (voiced by Celeste Holm) has run off with one of their husbands. But which one?

Masterfully told in flashback, A Letter to Three Wives has everything you’d expect in a Joseph L. Mankiewicz picture: a ridiculously fantastic screenplay, strong female leads that don’t feel like caricatures, a great ensemble cast (which includes Kirk Douglas and Thelma Ritter), true-to-life depictions of marriage and friendship and a touch of class that has hardly ever been matched. Oh, and have I mentioned how witty it is?

Not only is this a great movie in itself, but also one of the all-time great suburban movies. I’ve always been fascinated by suburbia, because, as a writer, there is so much you can do with it, so many stories and characters, and A Letter to Three Wives is an excellent example of how to get it absolutely right.

Winner of Best Screenplay and Best Director Oscars (both Mankiewicz), A Letter to Three Wives is pure class.