Wishing you all a great holiday season!

See you next week! ❤

Edward Everett Horton. So immensely popular amongst Classic Hollywood buffs, I had to write his name in the sign-up for the blogathon as quickly as I could before someone else took it. He’s all mine, muahaha!

Like Thelma Ritter, Charles McGraw or Beulah Bondi, Edward Everett Horton is one of those character actors that can make you squeal with excitment just from seeing his name in the credits. But the thing is, it’s kind of hard to categorize what type of character actor he was. He’s not necessarily a sidekick in the traditional sense, and he’s not a scene-stealer either. He’s what I often call a ‘cherry on top’ character actor. With his piercing, expressive eyes, his iconic voice and his enviable comic timing, he makes any film better just by being in it and he always brings an extra slice of delight, humour and familiarity that you didn’t know you needed.

I was watching Trouble in Paradise (1932) the other day (shout out to the genius that was Ernst ‘so good, they named a technique after him’ Lubitsch) and I was once again amazed at how effortless he makes it look. I mean, he just had a gift for comedy, didn’t he? The double (or triple) take that he perfected is just wonderful and it’s probably taken for granted nowadays, because everybody does it, but Edward Everett Horton did it before anybody else. Personally, I think his scenes with Charlie Ruggles (another ‘cherry on top’ wonder, that undoubtedly is going to be featured on this blogathon, so check it out) are comedy perfection. Their timing is on point, and they feed off each other beautifully. A great unofficial comedy duo, for just that one film – oh, what could have been!

Of course, one of his most famous performances was in Holiday (1938), in which he reprised the role of Nick Potter that he’d previously played in the original Holiday (1930). Holiday is one of the loveliest movies ever and I usually watch it around this time of year (as I did last night), and while I love Katharine Hepburn and Cary Grant (I don’t believe I ever mentioned that…), I’m always extremely happy to see Edward Everett Horton whenever he comes on. He just had that wonderful quality about him. He’s comforting, he’s warm and he’s reliable – in the best possible sense of the word.

For me personally, Edward Everett Horton is one of the all-time great character actors. In fact, I think he’s the definition of a character actor. There wasn’t a whole lot he couldn’t do and 1930s/40s comedies wouldn’t be the same without him.

Click here to read the other entries on the What a Character! Blogathon.

Ah, the theater. That wonderful thing out there, drenched in magic and lights, that only a handful of people will conquer. It’s an everlasting institution that will never go out of style. And rightly so. And in my opinion, capturing the essence of the theatre and everything about it on film isn’t easy and Morning Glory (1933) and Stage Door (1937) have managed to do just that in their own way.

In Morning Glory (dir. Lowell Sherman), Katharine Hepburn plays Eva Lovelace, an aspiring actress with a dream in her heart and a goal in her mind. She arrives at the offices of the Easton Theater, hoping to speak to Louis Easton (Adolph Menjou) in order to get a role in an upcoming play. While there, she meets all sorts of theater folks: Rita Vernon (Mary Duncan), the ‘diva’, Robert Hedges (C. Aubrey Smith), a veteran character actor, Joseph Sheridan (Douglas Fairbanks Jr), the young playwright, and, of course, Louis Easton, the powerful theatre producer that everyone wants to impress. In Stage Door (dir. Gregory La Cava), she plays Terry Randall, a well-spoken amateur actress who arrives at the Footlights Club, a theatrical boarding house in New York, hoping to get a room. The other aspiring actresses take a disliking to her straight away, because of her upbringing and superior attitude, which doesn’t go down too well in a house full of young, wannabe starlets. As is pointed out many times throughout the film, there’s never a dull moment at the Footlights Club. Amongst its many eccentric and dynamic characters, there’s Jean (Ginger Rogers), Terry’s cynical roommate, Linda (Gail Patrick), the ‘Queen Bee’, Eve (Eve Arden), the wise-cracking amateur, Judy (Lucille Ball), the loveably sarcastic one, Anne (Constance Collier), the aging actress and Terry’s supporter and, of course, Kay (Andrea Leeds), the tragic actress who wants a break-through more than anything in the world.

While the subject matter is pretty identical, Morning Glory and Stage Door are two different animals. In Morning Glory, this little world is presented to us in unashamed fashion and Eva Lovelace is the perfect representation of the wannabe-actress at the center of it all: a wide-eyed, eccentric, ambitious woman, with a childlike innocence that is yet to be spoiled and the belief that she can and will make it. Katharine Hepburn won her first of four Oscars for this performance and you can see why. That wonderful Katharine Hepburn quality was there all along and Eva Lovelace was the perfect character for her to shine with. Stage Door, to me, is THE best depiction of not only the theater world and community in a film, but also of female friendships and their many nuances. It’s so true-to-life, relatable and poignant – particularly with regards to the sleazy producer Anthony Powell (Adolph Menjou), a character who is evidently still relevant – that it amazes me how it’s not more widely acknowledged for its efforts to depict both of these worlds so accurately. Morning Glory relies on a few stereotypes to get its point across, even if for comedic effect, while Stage Door deals with these stereotypes in a more human way. However, both of them are unafraid in their quest to showcase showbusiness and nearly all of its elements, including the abhorrent exploitation and abuse of power. And this was in the 1930s!

Although Stage Door is the better movie of the two and certainly one of the greatest movies of the decade, you can’t go wrong with either of them. They hold a mirror up to showbiz and it ain’t going to be pretty. But damn, it’s going to be good. 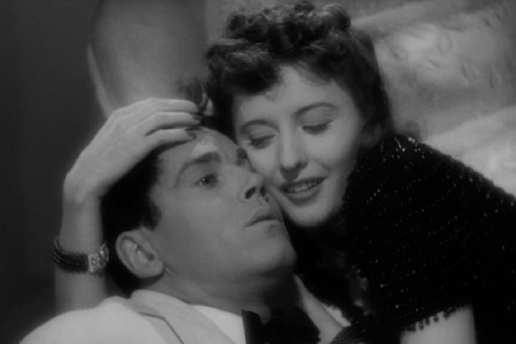 I mean, what’s not to love, really? It’s just a delight of a movie. And like any screwball comedy, this is one of those movies that you can watch over and over. So I thought I’d share with you some of the things I love about it:

– The chemistry between Barbara Stanwyck and Henry Fonda. They were perfectly cast in this, and they play off each other brilliantly. Barbara Stanwyck could do anything you threw her way, so her comic ability comes as no surprise, and Henry Fonda is just wonderful in everything and this rare comic role (oh, there should have been more!) is a delight.

– The characters. Screwballs are nothing without their supporting cast and The Lady Eve is a goldmine of colorful characters. From the ‘Colonel’ (Charles Coburn), to Muggsy (William Demarest), to Horace (Eugene Palette), everyone is on point in this.

– The scene with the horse ALWAYS makes me laugh. ‘Stop that! Oh sorry, I thought it was the horse.’ It’s so silly, but just the way she says that, without even trying to be funny, is pure gold.

– The ‘You don’t know what you’ve done to me’ scene. This, to me, is one of the archetypal scenes in screwball comedy. It’s so perfect. The sexual innuendo, the playful seduction, the witty dialogue… This is screwball at its best.

There are loads more, of course. The Lady Eve is one of my favorite screwballs ever and did I ever mention how much I love Barbara Stanwyck?