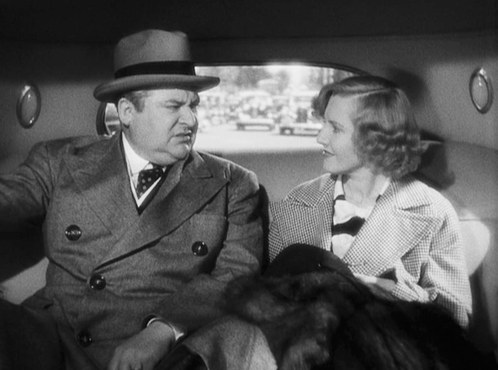 What better way to start off 2018 than with the darling and ludicrously lavish Easy Living (1937)? The screwball comedy that should be a lot bigger than it is. Like, My Man Godfrey (1936) big. The Mitchell Leisen-directed, Preston ‘Mighty’ Sturges-penned Easy Living is an easy-going, well-balanced sophisticated piece of comedy gold with everything going for it.

Last year, I talked about how much I love it and how my favorite thing about it is the wonderful Mr Louis (Luis Alberni), who might actually be one of my top 5 favorite screwball comedy characters ever. I mean, every single thing that comes out of his mouth is absolutely priceless! However, despite it being an fantastic screwball altogether, the car ride in the beginning is a standout. Not THE standout, but a standout nonetheless.

In it, J. B. Ball, played by the grumpy cat of screwball comedies Edward Arnold and Mary Smith, played by the always exceptional Jean Arthur, are on their way to Mary’s workplace, the offices of the Boys Constant Companion magazine. On their way there, Mary mentions that she was going to buy a fur coat, like the one she now has, thanks to Mr Ball. This leads to a hilarious and nauseatingly confusing discussion about installment payments and percentages, that keeps going around in circles, with neither of them backing down, culminating in the most elegantly delivered insult. It is such a screwball comedy moment, so effortlessly funny and perfectly well-timed. Not to mention that Edward Arnold with his facial expressions, and Jean Arthur and her impeccable timing and delivery are probably the only two people who could make such a conversation funny.

This scene should be a must-watch for actors everywhere. Although to be fair, every scene in Easy Living is fantastic. The hotel suit scene? Outrageously good. ‘Golly!’, Mary cries. Golly is right.