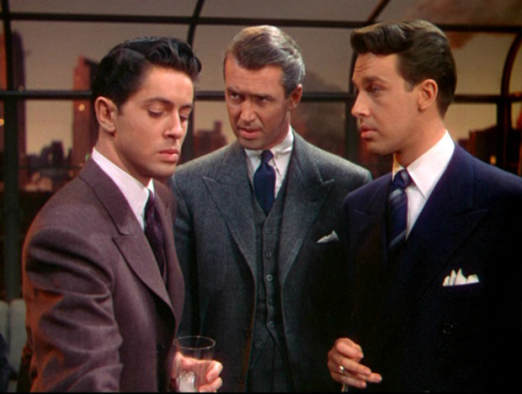 I adore Rope. I know that feels like a rather insipid statement, but it’s Hitchcock, so there’s not a whole lot left to say. I blame film students. So instead I’ll just randomly tell you why I love Rope, in what I sometimes call ‘5 things I love about…’. Other times, it’s 7, but I think this list covers it.

– The long, continuous takes give Rope a ‘play’ feel, and it’s quite genius. It is a play originally (Patrick Hamilton, 1929) and it just screams it. As a playwright myself, I have been unknowingly influenced by it for years. In fact, this is the type of thing that makes you go ‘Damn, I wish I’d thought of that.’

– John Dall and Farley Granger are deliciously despicable as the arrogant murderers turned party hosts, serving food from their victim’s ‘grave’ as they entertain their guests.

– Mrs Wilson (Edith Evanson)’s solo take, when she’s clearing the table, coming in and out of the living-room, with the camera steadily focused on her is incredible because of how much tension it holds. It’s one of the most nerve-wrecking scenes in the film, in my opinion.

– Movie talk! ‘I’ll take Cary Grant myself!’ ‘Oh he was thrilling in that new thing with Bergman’ Wink, wink. The funniest moment.

– The final scene is spectacular. Rupert Cadell (Jimmy Stewart)’s speech is delivered in his usual, passionate, Mr Smith-like way and every word burns through your soul. If this doesn’t make you hate Brandon and Phillip more than you already should, then nothing will.

Rope might not be the best Hitchcock film, but it is certainly one of the most daring and one of my personal favorites. But then again, I’ve said that about nearly all of them. Still working on my top 10. It’s not easy, I tell ya.