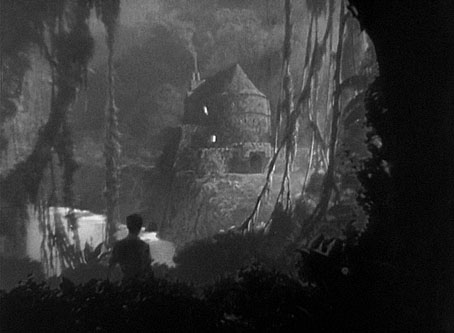 The Most Dangerous Game (1932, dir. Irving Pichel and Ernest B. Schoedsack) knows what it is and doesn’t hold back. Starting with its mysterious opening credits (that Max Steiner theme tune!), it lets us know straight-away what we’re getting into.

A ship sails through a channel off the South American coast. Aboard is Bob Rainsford (Joel McCrea), a big game hunter, and his wealthy friends, who engage in a debate about hunting for sport. Rainsford opines that there are two kind of people in the world: those who hunt and those who are hunted. Shortly afterwards, there’s a crash. The ship sinks with nearly everyone in it and, after two of the passengers are eaten by a shark, Bob becomes the only survivor. He emerges in a small island, and stumbles on a sinister mansion. As it becomes clear that he’s not the only ‘guest’, Bob realizes that the tables have turned…

Right from the beginning all the way to the movie’s heart-stopping climax, The Most Dangerous Game is non-stop thrill-fest. And like with most horror pictures, the villain is the most interesting character. Count Zaroff (Leslie Banks), the owner of the house and a big game hunter himself, is an eccentric, well-spoken, clever, peculiar-looking, homicidal maniac who takes sadistic pleasure in killing (‘Kill, then love… when you have known that, you have known ecstasy..’). His fortress is certainly a reflection of his self-absorption: a menacing, sinister place in the middle of a deserted island, with perhaps the creepiest knocker you’ll ever see – making its second appearance after the credits. Because it’s horror, Bob walks into this gothic house, and the door closes behind him, revealing Ivan (Noble Johnson), the servant. We’re in. And as Zaroff comes walking down the stairs, elegantly dressed and scar-faced, we realize that this is not going to end well. Bob is stuck, locked in, in a way that is reminiscent of William Holden in Sunset Blvd (1950). And there’s a sort of party going on. A strange party of four, consisting of himself, Zaroff, and siblings Eve (Fay Wray) and Martin (Robert Armstrong), two passengers from the previous ship-wreck. Things get even stranger, as Zaroff and Bob exchange opinions about hunting that lead to philosophical existential questions which contribute to the reversal of role identity (villains vs hero) of both Zaroff and Bob, as we’re forced to answer their questions ourselves and decide what’s wrong and what’s right in this underrcurent debate of hunters and huntees. However, as this goes on, Zaroff slowly reveals his true intentions… The most dangerous game is that of hunting men, of course (sexual undertones galore in this one!) and by the time Bob realizes this, it’s too late.

One of the most thrilling pictures of its day, The Most Dangerous Game still holds up fantastically well today and is often thought to be the finest adaptation of Richard Connell’s classic story – and there have been quite a lot. Not to mention that Zaroff, as well as Banks’ outstanding perfomance, should rightfully go down on history as one of the greatest villains in horror history.