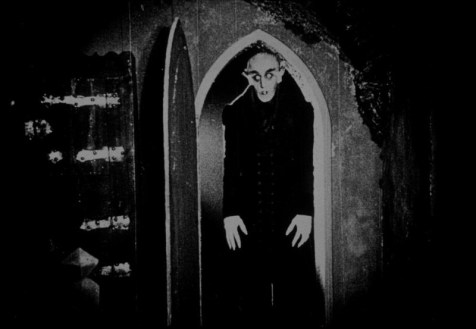 Everything’s been said about Nosferatu (1922), but we can’t really let Classic Horror Month go without talking about it. An unnoficial adaptation of Bram Stoker’s Dracula, Nosferatu has widely been considered to be the first horror movie ever made and some might even say, the finest.

Germany, 1838. Estate agent Thumas Hutter (Gustav van Wangenheim) travels to Transylvania to meet a new client, Count Orlok (Max Schrek). Orlok offers Hutter dinner and, after Hutter cuts his finger while eating, tries to suck his blood out… Things get even weirder the next day after Hutter wakes up in the castle and starts noticing some strange occurrences, particularly when Orlok mentions, after seeing her photo, that Hutter’s wife Ellen (Greta Schroder) has a ‘lovely neck’…

F. W. Murnau’s superbly inventive direction gives Nosferatu a German Expressionist feel and a sense of horror and macabre that many have tried to re-create over the years. Its subject also provides the staple for horror flicks to come, as it takes nearly all of its elements and places them carefully to maximum effect: firstly, the age-old tale of the monster/vampire/supernatural creature that terrorizes everyone in sight – Hutter’s mention of Count Orlok’s name in the inn where he’s having dinner the night before meeting him, makes the locals gasp so loud you can almost hear it. This, of course, has been the standard of nearly all pictures of the genre and quite rightly. It’s a fantastic way of approaching evil and creating this sort of eminent fear in the audience’s mind. A small, peaceful town – for the most part – rocked to its core by this creature, is a wonderful way of kickstarting a horror story. Hutter, as is expected, dismisses their pleas, and goes up to the castle anyway. Once there, we get to see for ourselves the eluvise Count Orlok: an utterly grotesque creature, with big eyes, big ears, claw-like hands and a hump on his back, an impossibly repulsive and creepy figure that becomes ever scarier as the movie goes on. After it becomes obvious that Count Orlok is thirsty for blood, Nosferatu beings its A-game and creates a horrifying tale that relies mostly on visuals and characters. On top of that, not only does it provide a sort of standard for what the horror genre would become, but it also reverses its elements, particularly in the character of Ellen (Greta Schroder), Hutter’s wife and the object of Orlok’s obsession. When Orlok expresses his interest in her, Ellen becomes his victim, yet in many ways, she has a hold on him and she knows she must sacrifice herself in order to save the town and everyone in it, even though she was thrust into this nightmare without really having done anything to deserve it. Could Ellen be the hero, rather than Hutter? Maybe. She’s an atypical heroine, but then again Orlok is an atypical villain. Is he human? A vampire? A supernatural being? Perhaps the most fascinating thing about him is that, whatever he is, he is unashamed about it. His image is grotesque and his intentions are cruel and brutal. He is unafraid and he knows the power he has. So much so that everyone in town knows and fears him. He has the ability to turn an otherwise quiet town into a pandemonium, particularly during the second half, when the plague arrives. Everyone is utterly horrified and this town becomes the stuff of nightmares: mass death, references to the occult, people fearing for their lives and paranoia. It’s chaos. Of course, one of the reasons it has the effect it does is because of the brutal imagery and wonderfully crafted direction, which is a constant throughout the film. Shadows are used to perfection – no, I won’t go on about the iconic scene – and camera angles are perfectly positioned to create this sense of terror and claustrophobia. It’s magnificently horrifying.

Endless remakes, adaptations and references could have easily taken away from its magic over the years but they haven’t. A silent movie that relies mosty on visuals (and how!), Nosferatu is as impressive today as it was in 1922 and it conveys what it set out to like nothing else before or since.