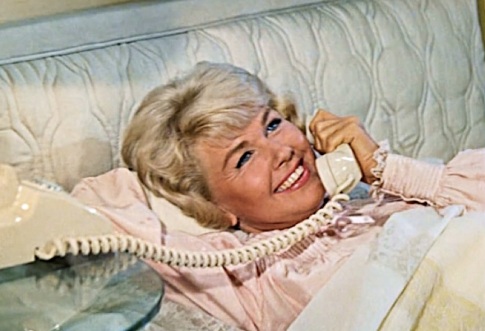 We sadly lost the great Doris Day on Monday, so I’ve decided to talk about one of my favourite performances of hers, and the only Oscar nomination she received, in the magnificent Pillow Talk (1959, dir. Michael Gordon), the first of three movies she made with her best friend Rock Hudson – the other two being Lover Come Back (1961, dir. Delbert Mann) and Send Me No Flowers (1964, dir. Norman Jewison).

Pillow Talk stars Doris Day as interior decorator Jan Morrow, who has the misfortune of having to share a telephone line with songwriter and massive manhoe Brad Allen (Rock Hudson), much to the annoyance of both of them. It’s not hard to imagine where this is going, but the beauty of Pillow Talk is that it doesn’t feel like just another predictable romantic comedy. The Oscar-winning screenplay is tight and full of easy-going charm, and the performances, both Day’s and Hudson’s, as well as the supporting cast – Tony Randall and Thelma Ritter (in an Oscar-nominated performance) in particular – are nothing short of wonderful. Doris Day is especially great. I couldn’t decide which scene to pick for this month’s COMEDY GOLD, because it is such a solid, consistent and confident performance in a film that enjoys all of those qualities throughout. It’s perhaps no surprise that she got an Oscar nod for it, considering that it pretty much showcases her many talents in a little less than two hours. Right from the off, we get to listen to her beautiful voice singing the title track, and throughout the film we’re treated to her perfect – PERFECT – comic timing, her ability to convey all of her thoughts and feelings with just an expression, not to mention the ease with which she balances it all out. Also, shout-out to the wonderful Rock Hudson, who, in my opinion, never got the praise he deserved. Their combined talents and chemistry with each other make them one of the greatest partnerships in the romantic comedy canon as well as one of my personal favorite showbiz friendships. I’d like to think they gave each other a big hug upon her arrival in Hollywood Heaven.