Ah, Mae West. Where does one begin with Mae West *cue Mae West-style double entendre*? If you know anything about her, you know she was an original, a trailblazer and a pioneer in many, many ways. And if you watch her films, you’ll realize why she was always the main attraction. When she’s on the screen, you know she’s going to be a riot and you know you’re going to have a good time.

Lowell Sherman’s She Done Him Wrong is only 65 minutes long (shortest film ever to be nominated for Best Picture) but boy is it frantic! So many things happen, from murder to attempted suicide to doomed romances, not to mention Mae West’s many, very famous one-liners. It goes a little something like this: Lady Lou (West) is the most famous woman in town and the main performer in a New York saloon. All the men want her and the feeling is mutual. However, she has an ex-boyfriend in prison who still wants her no matter what and who vows to take revenge on any man who gets in between them. One of those men is Captain Cummings (played by a very young Cary Grant), the officer at the receiving end of Lady Lou (West)’s ‘come up sometime and see me’ line. Mayhem, I tell you.

It’s a crazy ride of a film, and Mae West is a joy to watch. Full of confidence and wit, she had a ‘this is who I am, deal with it’ air about her that is just fascinating. She also had a very strange walk, that I have been trying to imitate for years. I can do the voice, so it’s safe to say I’m halfway there. Woohoo!

1932 was a great year for movies. Just look at these gems: Grand Hotel, A Bill of Divorcement, Rain, No Man of Her Own, Red Dust, Scarface, The Mummy, Freaks, etc… Two of the year’s hidden gems, however, are The Greeks had a Name for Them (a.k.a. Three Broadway Girls) and Three on a Match. They both belong to the ever-so-fascinating Pre-Code era and they scream Pre-Code!

The Greeks had a Name for Them (dir. Lowell Sherman) revolves around Jean (Ina Claire), Schatzi (Joan Blondell) and Polaire (Madge Evans), three money-hungry women who are always on the look-out for a millionaire. Jean is the most ruthless and unapologetically shallow of the three, while Schatzi and Polaire are more kind-hearted and down-to-earth. Jean and Polaire are so different, in fact, that Schatzi often finds herself getting in between the two of them to keep them from getting into an argument. They go to parties, behaving like high society girls, they steal each others’ boyfriends and deliver zinger after zinger to each other. They will leave you in stitches.

Three on a Match (dir. Mervyn LeRoy), however, is much darker picture. It’s only about an hour long, but it has enough drama in it for a mini-series! Ruth (Bette Davis), Mary (Joan Blondell) and Vivian (Ann Dvorak) went to the same elementary school. They meet by accident after many years and decide to have lunch together. Ruth is now a stenographer, Mary went to reform school and is now an entertainer, and Vivian is married to a lawyer and has a beautiful son. She is seemingly the most successful of the three but she is deeply unhappy with her life. After going on a cruise to cheer herself up, things take a turn for the worse. Blackmail, kidnapping, divorce, marriage and an early appearance by Humphrey Bogart all combine to make this one of the quintessential Pre-Code movies.

Some of the recurring early 30’s themes might seem dated these days, but I guess one has to look past them to enjoy the films. Because they are indeed endlessly enjoyable. A Pre-Code marathon is something one just has to have at some point.

‘Comedy demands more timing, pace, shading and subtlety of emphasis. It is difficult to learn but once it is acquired, it can be easily slowed down and becomes an excellent foundation for dramatic acting’ Irene Dunne

She and Cary Grant play a couple who is about to get a divorce. The problem is, they’re still in love and because of that, they will try their best to get in the way of each other’s romantic plans. Cary Grant is perfect as always, but Irene Dunne ‘steals the show’ – yet another expression I don’t like.

Her performance as Lucy Warriner is a rollercoaster of emotions and she plays them all to perfection. Her natural ability to be funny (‘I never could do that!), her impeccable delivery and hilarious facial expressions that go with it, as well as those heart-breaking moments when her character’s true feelings come out – it’s one of the most layered and carefully constructed performances ever.

She was rightfully nominated for an Oscar but lost out to Luise Rainer (The Good Earth, 1937). In fact, she was nominated a total of 5 times and never won. What was the Academy thinking? 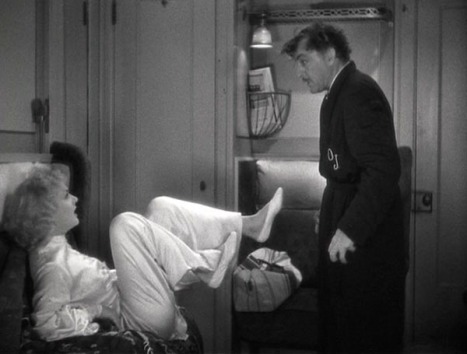 When I posted that photo of Carole Lombard the other day, I suddenly realized I haven’t talked about one of my very favorite screwball comedies, the hilarious Twentieth Century (1934). The plot, if you can keep up with it, goes as follows: John Barrymore plays Oscar Jaffe, a Broadway empresario, who is as crazy as a box of cats. He casts the lovely Lily Garland (Carole Lombard) in his newest show, which turns out to be a huge success, making Lily an overnight sensation. The hits keep coming in and, after a few months, she decides to board the 20th Century train headed for Hollywood. She becomes a big movie star as quickly as she’d become a big Broadway star. Jaffe, on the other hand, keeps producing flop after flop. As a result, he decides to get on the 20th Century and get Lily back. By pure coincidence, she boards the train with her boyfriend in Chicago the same night. And as you can probably imagine, it is going to be the craziest train ride you will ever see in a movie.

Directed by Howard Hawks, Twentieth Century is a classic screwball comedy, absolutely hilarious and absolutely insane. John Barrymore gives arguably the best performance of his career and one of the funniest of all time and Carole Lombard is amazing, as always. I saw this on the big screen and it was a marvellous experience. The theatre was packed and everybody loved it. I cannot recommend it enough.