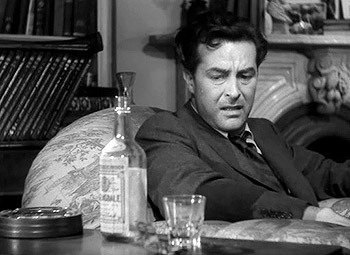 Because it’s Oscar season, I wanted to talk about one of my all-time favorite performances in the Best Actor in a Leading Role category, the wonderful Ray Milland in The Lost Weekend (1945).

The Lost Weekend is a stark, honest and heart-wrenching depiction of alcoholism and its consequences, as we follow Don Birnam through his four-day drinking bender. The film starts by showing us a bottle hanging out of a window. This is Don’s apartment. We see him packing his things as his brother Wick (Phillip Terry) talks him through the weekend they’re about to have. Helen (Jane Wyman), Don’s girlfriend, comes over to see them off and casually mentions she’s going to see a show that afternoon and that she has two tickets. Don suggests that Wick should go with Helen and that they can catch the 6.30 train. Both Wick and Helen know exactly what he has in mind but he reassures them they’ve got nothing to worry about. What follows is a harrowing, nerve-wrecking sequence of events as Don gets increasingly desperate for a drink, and another, and another, culminating in that infamous ‘mouse and bat’ scene, superbly acted out by Ray Milland.

It’s hard to choose a best moment in this faultless performance, but the scene where Don explains why he does this, is surely very near the top. He’s a failed writer – we’ve all been there – and this is his way of coping with it: he drinks himself into oblivion. And the way he details his suffering in this strikingly real speech (‘There are two of us, you know: Don the drunk, and Don the writer’) is heart-breaking because it’s so true.

Ray Milland won the Oscar for his performance and, let’s face it, he had no competition. His performance was a break-through, an eye-opener and it’s completely timeless. The Lost Weekend ended up with three more Oscars, for Best Picture, Best Director (Billy Wilder) and Best Adapted Screenplay (Wilder and Charles Brackett, adapted from Charles Jackson’s novel), but more importantly, it stands the test of time for its unafraid depiction of such a delicate subject, with a phenomenal central performance at its core.