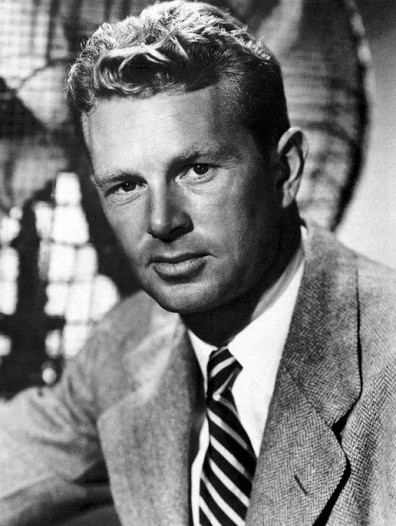 A while ago, my friends Virginie and Crystal asked me if I’d like to participate in their upcoming Stars Blogathon. It’s about stars that we don’t know that much about or haven’t seen that many movies with. You know I love my blogathons so obviously I said yes. And so, I chose to do my article on Sterling Hayden. I’ve always felt that he was part of that group of actors who never got that much credit and were slightly underrated. So I decided to look up some of his movies that I hadn’t seen before. One of those was Naked Alibi (1954). That one caught my eye because it’s a noir and because Gloria Grahame is in it and I’ll watch anything with her. It’s a nice little noir about a man called Al Willis, played by Gene Barry, who has been accused of killing a cop. Hayden plays Joe Conroy, the police officer who is determined to bring him to justice. He is so absolutely convinced of the man’s guilt that he becomes pretty much obsessed with the whole case. He then goes to Marianna, Willis’ long-suffering girlfriend played by Gloria Grahame, and asks for her help in finding him. It’s not one of the very best noirs, but it’s good. Hayden’s performance, however, is great. He always had this trademark bitterness about him, and I think because of that, he was kind of stuck with playing these tough, down-on-his-luck type of characters. And boy, was he good at it! And like I said, I think he was a bit underrated as an actor. Nicknames like ‘The Most Beautiful Man in the Movies!’ or ‘The Beautiful Blond Viking God’ probably didn’t help, either. But what can you do!

Naked Alibi is worth checking out. It isn’t at the top of my movie recommendations list, but it is on the list and it has a cracking cast! And like I’ve always said, if there’s a movie left to watch, you have to watch it. It’s not much of a motto, but you get the point.