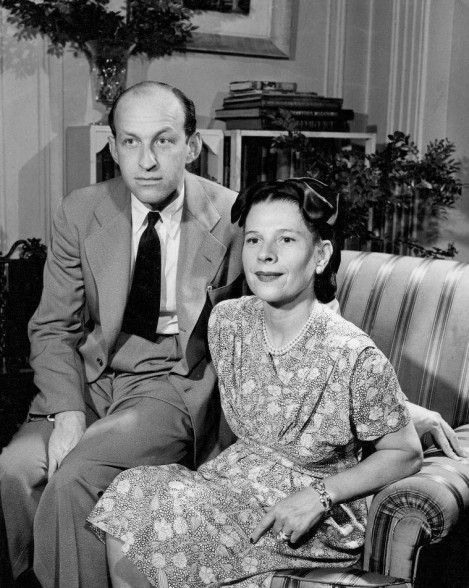 Today is Katharine Hepburn’s birthday, and because I’ve talked about her ad nauseam here on The Garden, I thought I’d focus on something else this year: Hollywood power couple and lifelong friends of Spencer Tracy and birthday girl, screenwriters and all-round talents Garson Kanin and Ruth Gordon.

Born in 1912, Garson Kanin started out his career as a musician and comedian, and after graduating from the American Academy of Dramatic Arts, he began appearing in plays on Broadway and in 1936, he directed his first play, Hitch Your Wagon. By this time, Ruth Gordon (b. 1897) was in Hollywood, playing mostly supporting characters, having acted in silent movies and on Broadway for over twenty years, starting in 1915, after also having graduated from the American Academy of Dramatic Arts. They married in 1942 and in 1947, they wrote the screenplay for A Double Life (1947, dir. George Cukor), for which they received an Academy Award nomination. By this point, Gordon was also writing her own plays, including the autobiographical Years Ago, later turned into the movie The Actress (1953, dir. George Cukor), for which she also wrote the screenplay, while Kanin had just directed Spencer Tracy in the play The Rugged Path, Tracy’s first play in fifteen years. Kanin and Gordon were very close friends of Tracy and Hepburn’s – as detailed in Kanin’s book Tracy and Hepburn: An Intimate Memoir – and even incorporated some of their personality traits in their respective characters when they wrote the screenplay for Adam’s Rib (1949, dir. George Cukor), for which they got yet another Oscar nod. In 1950, Cukor directed the movie adaptation of Kanin’s 1946 play Born Yesterday, the most successful of his career and in 1952, he directed Pat and Mike (1952), another Tracy and Hepburn movie, for which Kanin and Gordon received their last Oscar nomination for Best Screenplay. That same year, they also wrote the script for The Marrying Kind (1952, dir. George Cukor), their last official collaboration. Throughout the 1950s and 60s, Kanin and Gordon continued to work in Hollywood and on Broadway, with Gordon winning an Oscar for Supporting Actress for Rosemary’s Baby (1968, dir. Roman Polanski). Garson Kanin and Ruth Gordon remained married until her death in 1985, fourteen years before his death in 1999.

2 thoughts on “SCREENPLAY BY: Garson Kanin and Ruth Gordon”